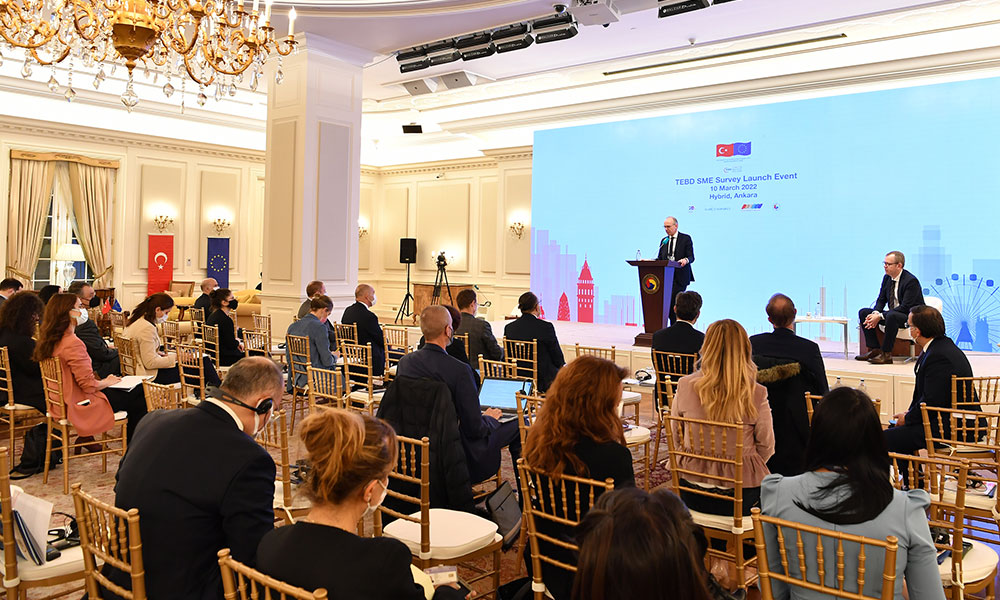 The Turkey-EU Business Dialogue (TEBD) Project launched the results its SME Survey on the “EU-Turkey Business Relations: views of the Turkish private sector” on 10 March 2022 in a hybrid environment at TOBB Premises in Ankara, Turkey.

1828 Turkish companies gave their views related to trade and economic cooperation between Turkey and the EU. The aim of the survey was to provide insight on EU-Turkey business relations.

Following the opening statements, Eurochambres’ CEO Ben Butters, proceeded with the results of the survey. The SME Survey, provided insightful information, which was carried out in Turkey was conducted out to collect information from a myriad of Turkish companies as well as in the EU Member States regarding their experiences and views in relation to economic cooperation and trade between Turkey and the EU. The end-goal of the survey has been to provide a comprehensive assessment of EU-Turkey business relations.

The main results of the survey concluded how the Custom Union has transformed Turkey, bolstering it from an agrarian country towards an industrial one. Moreover, the survey elicits the strong support among Turkish companies for the EU process, placing emphasis on the Customs Union rather than the EU accession process itself. As they closely follow the EU’s green and digital transformation process, the role of the TEBD project has been of paramount importance as instrument. Lastly, it was observed how the de-carbonization can be viewed as an opportunity for EU-Turkey relations. This subsumes the Customs Union modernization, turning into a transformative agenda along with the Green Deal with immigration appearing as too transactional; as well as the impression of how the de-carbonization process does not only include climate aspects but also areas that vary from energy policy to trade policy, and from security policy to industrial policy.

Overall, the SME Survey Launch Event on the “EU-Turkey Business Relations: Views of the Turkish Private Sector”, turned to be a fruitful dialogue exchange of views on cardinal points that affect both the EU and Turkey, which provided a new layer of successful future cooperation between the two.

Please click here for the key findings of the SME Survey Report.